Pandas on the Mend? 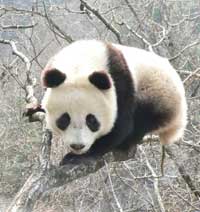 The giant panda is one of the world’s most endangered and elusive species. It is found only in a restricted mountainous region in China with an unusual dietary dependence on bamboos found only in these mountains. This elusive nature has shielded important knowledge needed to save it from extinction, until now. (Image courtesy of Cardiff University)

Despite recently expressed concerns for the survival of the Giant Panda due to persistent problems associated with habitat destruction (see Nature Reserves Aren't Protecting Pandas, Study Shows; April 6, 2001) and attempts to increase Giant Panda numbers by artificial means (see Researcher Says Panda Cloning "Worth The Risk", July 7, 1999), it may have a brighter future than previously thought. The following account documents the results of a recent survey of giant panda numbers taken by a joint Sino-Canadian scientific team.

“Scientists at Cardiff University, using a novel method to estimate population, have found that there may be many more giant pandas remaining in the wild than previously thought. Understanding population trends for giant pandas has been a major task for conservation authorities in China for the past thirty years, during which time three national surveys were carried out. The first two revealed alarming evidence of decline in the numbers of giant pandas. However, the most recent survey, carried out in 2002, showed the first evidence of a recovery, thanks largely to protection measures taken by the Chinese government including a network of natural reserves and strictly enforced bans on poaching and deforestation.

"However, given the variable accuracy of traditional ecological population recording methods, scientists from Cardiff's School of Biosciences working with a team in China used a novel approach to accurately estimate population size. The results are published in the international journal Current Biology.

"Professor Bruford said: 'Our results found that previous surveys underestimated the population by more than 50%. These finding indicate that the species has a much better chance of long-term viability, although we must not become complacent, since the population size is still perilously low.'

"The scientists anticipate that these results are likely to be replicated in other key reserves indicating that there may now be many more giant pandas remaining in the wild than previously thoight."

This is of course very encouraging news, particularly for those of us who have a passing knowledge of Chinese prehistory. The giant panda is a conservationist icon and its study in the wild by George Schaller and Chinese colleagues (The Giant Pandas of Wolong) in the early 1980s was a clarion call for renewed efforts to save endangered species worldworld. The giant panda was a major faunal element throughout China south of the Qinling Mts. during the Pleistocene and ranged as far north as the "Peking Man" site during climatic optimums. It survives today as a relic of times gone-by, much as if the giant sloth or glyptodon had survived until today in the American southwest.

The giant panda is now known to be a true bear and not a member of the racoon family as long thought. Its relationship to the smaller red panda, which is regarded today by most systematists as closely tied into the basal radiation of mustelids and procyonids amongst the arctoid canrivorans, is thus paraphyletic. The term "panda" is, like the term "monkey" amongst Primates, purely gradistic in nature and doesn't represent a phylogentic clade. Both species , moreover, seemingly represent early, specialized offshoots of the respective clades to which they belong.