The Chinese Evidence for the Evolutionary Origins of Fish

In this post we’ll discuss the origins of the modern class of boney fish, which as we will see is directly relevant to our own ancestry. First off I’ll present a basic review of fish systematics. There are three extant classes of aquatic vertebrates generally referred to as “fish.” These include the jawless lampreys and hagfish (class Agnatha), the cartilaginous sharks and rays (class Chondrichthyes) and the aforementioned boney fish (class Osteichthyes). The boney fish are further divided into the familiar ray-finned fish (subclass Actinopterygii) and the lesser known lobe-finned coelacanth and lungfish (subclass Sarcopterygii). The actinopterygians are dominated by the teleosts, which include all living boney fish other than sturgeon, gars and their allies. The fossil record of fish is replete with many extinct groups belonging to all the above taxa as well as many other higher order taxa that have since gone extinct (such as placoderms, and acanthodians).

One of the major issues in the evolution of boney fish is the relationship between the ray-finned actinopterygians and the lobe-finned sarcopterygians. When and where did their divergence take place and what were the morphologic characteristics of the common ancestor of these two major groups of fish? This divergence event has a direct bearing on our own evolution as well. Systematically Osteichthyes is a paraphyletic taxon in that it does not contain all the descendants of the common ancestor referred to above. This is due to the fact that the lobe-finned sarcopterygians are the evolutionary source for the terrestrial tetrapods, the four-limbed vertebrates that include amphibians, reptiles and mammals, hence our very origins are tied to the evolutionary split between ray-finned and lobe-finned fish. In this regard the recent announcement by Chinese scientists of a fossil species that had aspects of both extant suborders of boney fish discussed above, which lived more than 405 million years ago in southern China, sheds new light on the origin of the very evolutionary lineage that eventually gave rise to modern human beings.

Zhu Min and his team of researchers at the Institute of Vertebrate Paleontology and Paleoanthropoly, Chinese Academy of Sciences (CAS), originally found the fossils of the ancient fish in 2001 and 2002 at Qujing in Southwest China's Yunnan Province. In the following three years, Zhu and his colleagues discovered more remains that confirmed that this ancient species provides a link between the ray-finned and lobe-finned fish that followed. Zhu and his fellow researchers called it Meemannia eos which translates as “Miman’s Dawn Fish," in honor of the famed Chinese paleontologist Md. Zhang Miman, an academic at the Chinese Academy of Sciences. Its discovery is an exciting step forward for research into the evolution and diversification of ancient fish and other vertebrates.

Martin Brazeau, over at The Lancelet, discusses this transition based on the recently described Chinese fossil Meemannia eos, and rather than reiterate his comments I present them in full below:

“I guess one can't really talk about an evolution transition having 'ends', since one might even consider the origin of vertebrates as a whole to be part of the origin of tetrapods story. However, we focus a lot on the transformation from sarcopterygian (lobe-finned) fishes to the earliest tetrapods like Acanthostega and Ichthyostega. Lest we forget the origin of the sarcopterygians themselves. This is a murky and poorly understood part of vertebrate evolution where the fossils are limited to what we affectionately call "thumbnail skulls". These are usually braincases and associated snouts that aren't much bigger than, well, your thumbnail (and kind of shaped like them too).

“In recent years, we have seen the publication of a number of really peculiar thumbnail skulls from China, nearly all of which belong to some kind of sarcopterygian. One of the defining features of the sarcopterygian skull is a joint that runs right through the braincase. The only living sarcopt to retain such a feature is the modern coelacanth. However, once upon a time in the Devonian, most sarcopterygians were built this way. We know these skulls are sarcopterygian because of this division of the skull and braincase, as well as the histology of the dermal bone. Sarcopterygians are unique in having had a system of pores and canals running through an enamel-like layer on the outside. This tissue matrix is called cosmine. One will often hear of "cosmine-covered osteolepiforms" or "cosmine covered sarcopterygians", to distinguish these forms from taxa that later lose cosmine (for instance, the loss of cosmine is a character that Tiktaalik shares with tetrapods).

“But apart from these defining features of sarcopterygians, the thumbnail skulls from China also have a strange mélange of characters from all kinds of other fish groups: actinopterygian (ray-finned) fishes, sharks, placoderms, and acanthodians. For instance, it was recently noted that several of these taxa had the bony facet for the attachment of an eyestalk -- a cartilage rod found in some modern sharks that supports the eyeball. Similar facets have been seen in fossil shark braincases and later in ray-finned fish braincases. Psarolepis, for instance, was shown to have a cheek very similar to that of an actinopterygian and it even had a spine on a shoulder girdle that was associated with the skull. The actual identity of some of these parts, however, may be disputed because we still haven't got whole skeletons of these fishes.

“Today (5-04-06) in Nature a new piece is added to this puzzle: Meemannia eos. This new taxon is peculiar as far as sarcopts go. It has something sort of like cosmine, but somewhat more rudimentary. However, another interesting aspect is the absence of an intracranial joint, like the one described above. 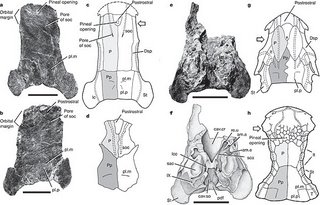 “Immediately, one is faced with two options: was the joint lost or was it simply primtive? The answer appears to be the latter, and that Meemannia is the most primitive sarcopterygian known to date. The skull roofing bones of Meemannia are curiously similar to those of primitive ray-finned fishes. In fact, the authors note, the snout appears to have been loosely attached to the rest of the skull, a feature also seen in placoderms. The weight of the evidence appears to support the conclusion that Meemannia is a rather 'primitive' animal. 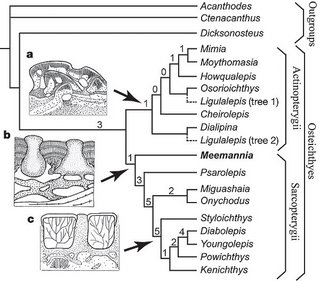 The figure is based on two most parsimonious trees that differ in the positions of Ligulalepis. Bremer support values are shown at nodes. Tree length 222, consistency index 0.6216, homoplasy index 0.3784, retention index 0.7807, rescaled consistency index 0.4853. See Supplementary Information for details. Insets compare the histological features of Meemannia (b) with those found in actinopterygians (Andreolepis, a) and crown-group sarcopterygians (Porolepis, c). From Zhu et al. 2006

“Furthermore, I mentioned that it had cosmine or something very much like it. The authors note that what we see in Meemannia the cosmine structure is unique among sarcopterygians and offers some clues about its natural history. In previous decades, the pore-canals have been suggested to represent a system something like the ampullae of Lorenzini in sharks. This is a network of electrosensory organs that sharks have spread over their faces, and the networks of the ampullae are quite similar to that seen in cosmine. Of course, cosmine-covered sarcopterygians are all extinct and we have no way of knowing what the function of the cosmine canals and pores were for. However, the new fossil suggests a rather different function: growth. Unlike the cosmine of other sarcopterygians, but somewhat like the enamel tissue of actinopterygians, the cosmine of Meemannia grew by the addition and expansion of layers. This suggests that Meemannia's cosmine growth is more primitive. Furthermore, this unique mode of growth suggests that he pore-canals may be a vascular system that supprted this, and may not necessarily have been for sensory purposes. However, I don't see these options as neccessarily exclusive, so I'm not sure if we can really rule out a sensory function just yet.

“Meemannia is another addition to the story of the early evolution of bony vertebrates. It's another clue about how this event proceeded and how the two major lineages of bony vertebrates emerged. We still need a lot more clues and a lot more work to figure out the details, but the fossils from China are (once again) helping to disperse the fog.”