More on the Origins of Lobe-finned (Sarcopterygian) Fish in China

Prior to the discovery and description of Meemannia eos discussed in my last post a number of ancestral boney-fish (osteichthreys) had been found in southern China during the late 1990s. Below is a reprint of an overview of these discoveries by Nature editor Henry Gee and relevant graphics from the Chinese Academy of Sciences website.

How vertebrates evolved from splashing about in ancient seas and lakes to strolling along the beach on a Sunday afternoon is a question of abiding interest to biologists, and takes an odd turn in a study of fossil fishes published this week1.

The research, by Per Erik Ahlberg of the Natural History Museum in London and colleagues, describes the discovery of a primitive and ancient fossil lobe-finned fish, and sheds light on a bizarre early episode in the evolutionary history of modern vertebrates.

Being land animals, our view of what's important in life is somewhat skewed. The fact is that the vast majority of vertebrates (animals with backbones) are those that we don't see very often -- fishes. Humans and most of the land animals we're familiar with (dogs, cats, horses and so on) can be seen as fishes that have become specialized for living out of water. To do this, their fins have become elaborated into legs.

Land vertebrates belong to a group of fishes called the lobe-finned fishes, or sarcopterygians. Sarcopterygians were once widespread, especially during the Devonian Period (408-362 million years ago), the so-called 'age of fishes'. But now only the land vertebrates, lungfishes and coelacanth survive.

Biologists have been particularly interested in studying the sarcopterygians because they are our aquatic forebears. How did they diverge from actinopterygians, the ray-finned bony fishes? And how are bony fishes as a whole related to other vertebrates such as sharks and exotic, extinct fishes such as placoderms and acanthodians?

The work by Ahlberg's team has caused quite a bit of surprise.

The researchers describe a very primitive sarcopterygian called Achoania from 400-million-year-old rocks in Yunnan in southern China. Remarkably, there is evidence that the eyes of this fish were held in place by stalks of tough connective tissue. This finding was something of a surprise because eyestalks are unknown in sarcopterygians, or indeed any bony fish alive today. But they are typical of sharks, which went down a separate branch on the tree of life millions of years before.

Ahlberg's team also find evidence for eyestalks in a previously known fossil sarcopterygian called Psarolepis This fish, which comes from rocks in Yunnan of similar age to those that yielded Achoania was once thought to have been an unremarkable sarcopterygian, if a rather primitive one. But further work2showed that Psarolepis had many features, such as prominent spines associated with its fins, that are very un-sarcopterygian, and more associated with acanthodians, placoderms and early sharks. What's more, work on a still-unnamed braincase of a primitive actinopterygian from Australia showed that it, too, may have had eyestalks3.

Three lessons can be learnt from the discoveries. First, that the ancestors of bony fishes in general, and sarcopterygians in particular, spent some time shedding primitive features characteristic of fishes in general before diversifying into a range of forms -- one of which gave rise to the land vertebrates. Second, that many features thought to have been specializations of archaic creatures such as acanthodians and placoderms had a more general distribution among vertebrates.

Finally, the work suggests that the Yunnan region of southern China was the birthplace of sarcopterygians, and therefore of the tetrapods, which include land vertebrates like ourselves. Some 400 million years ago, Yunnan and adjacent parts of Vietnam formed an isolated continent, a 'Garden of Eden' that saw the initial stages of sarcopterygian evolution.
References 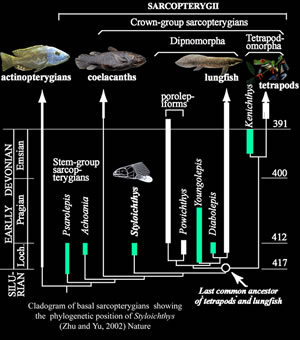 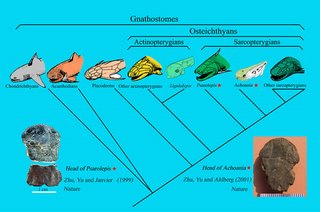