The recent surge of interest in possible Asian origins for the genus Homo prompts me to republish a piece I wrote a decade ago regarding what was then known of the earliest Asian hominins. Back then it was widely accepted by proponents of the “Out of Africa” hypothesis that Homo erectus was an evolutionary side branch of the human family tree, restricted to Asia, that eventually went extinct without issue. 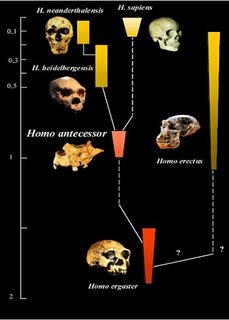 Our lineage was universally accepted to have evolved in Africa from descendents of H. ergaster, which was considered to be the last common ancestor of all later hominins, including both H. erectus and H. sapiens. In this scenario H. ergaster diverged into an Afroeuropean lineage, which subsequently split into European Neanderthals and the African ancestors of modern H. sapiens, and an Asian lineage, comprising H .erectus and its localized descendents in East and Southeast Asia. The hunt was thus on for early antecedents of an exclusively Asian H.erectus.

With the discovery of relatively complete hominin cranial remains circa one million years BP in Ethiopia and Europe that are nearly indistinguishable from penecontemporaneous classic H. erectus from China and Java, the idea of an exclusively Asian H. erectus distinct from an ancestral East African H. ergaster has, however, begun to recede. The acceptance of H. ergaster as a distinct hominin taxon is no longer as widely accepted as previously and H. erectus is now generally recognized as the pandemic early Pleistocene ancestor of all later hominins, including modern humans. 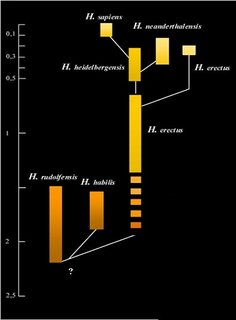 Widely accepted hominin phylogeny in which H. erectus is seen as the common ancestor of all later humans with a late survival in Asia as a relic species

As discussed in previous posts the discovery of the Dmanisi hominins dated to ~1.7 mya in the Republic of Georgia, has prompted some to suggest that the genus Homo had an extra-African origin. Is there really any substantial evidence for this hypothesis besides that presented and discounted in my previous posts on the Dmanisi remains? Not much new has emerged in the fossil record of China or Java relating to the presence of Plio-Pleistocene hominins (aka hominids) since I wrote the article mentioned at the top of this post although D. Tyler et al have recently described fragmentary and heavily distorted fossil remains attributed to “Meganthropus.” I will comment of that material in due course. Meanwhile, please proceed to my article on Plio-Pleistocene Asiatic hominids presented here.

Comments:
This is very interesting. When I took Bio in college, my teacher would not even give any consideration to the thought that maybe God and evolution were working together or not at all.

I ask this, because I believe it is a legimate question. If Christians are the ones who started the arts of science, why should we not be allowed to move forward? Are we too abnormal for a scientist? lol.

I have always loved science, but alas, I've had to stop. I was tired of being laughed at, ridiculed, and this without uncontraverable proof that their argument was correct!

Thank God Gallileo did not give up. Nor did Einstein. But then again, what did they know? They were men of God! (lol)

Congrats to rosemary, the very first commentator at "Sinanthropus!" I haven't done anything to promote the site, just lurking in the blogosphere waiting to be discovered. Anyway, I sympathize with rosemary's dilemna, but its hard for me to conceive of her situation, as I've never been exposed to that level of ignorance. Hang in there rosemary, you will be vindicated.