My previous post introduced readers to the fascinating research of Smith et al. regarding the dispersal of the earliest known euprimate genus Teilhardina from its apparent birthplace in China across the northern hemisphere to North America. Smith et al's. research is based on a high resolution assessment of the sedimentary environments in which the fossils were found. New investigative techniques allowed them to determine whether the fossil-bearing deposits were laid down before, during or after a climatic maximum that occured near the Paleocene/Eocene transition ~ 55 mya. A sequence based on carbon isotope ratios showed that Teilhardina asiatica was earliest, followed by T. belgica and T. americana . The spread of Teilhardina out of Asia into first Europe and then North America, across what was the more or less contiguous supercontinent of Laurasia, happened at a time when global warming is hypothesized to have spread a continuous canopy of evergreen forest across the northern latitudes. Many other mammalian genera are documented to have followed a similar eastward dispersal route.

Studies of this sort are what makes paleontology such an exciting field and shows it to be an experimental science in which hypotheses are generated by preliminary analysis of data collected in the field and then tested by falsifiable experimentation in the lab. There is one "true" story of the evolution and spread of life on earth which we are constantly unraveling with new and ever more analytic techniques.

Below is a figure from Smith et al's PNAS article that illustrates the research they conducted: 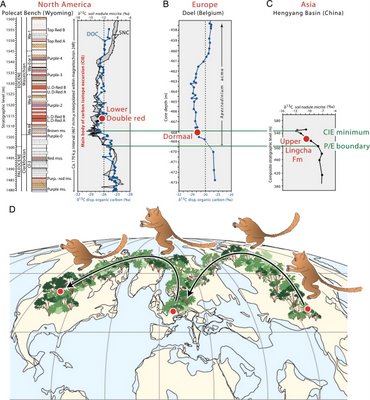 Paleogeographic map showing hypothetical migration routes of Teilhardina during the earliest Eocene. (A–C) Timing of migration is obtained by correlations of the

13C excursion in North America (A), Europe (B), and Asia (C). T. brandti and other modern mammals first occur in the Lower Double Red (1,512 m) of Polecat Bench, Wyoming, which is situated above the minimum value of the

13C excursion (spike at 1,507 m). The Lower Double (L.D-) Red has an estimated age of 19–25 Kyr above the P/E boundary, based on soil carbonate nodules (SNC) and dispersed (disp.) organic carbon (DOC) (14, 20, 21). U.D-, Upper Double; Purp., purple; Fm, formation. (D) We hypothesize that Teilhardina dispersed through continuous forest from southern Asia to Europe and from nothern Europe to North America during the first 25 Kyr of the PETM.