New Evidence for the Asian Origins of Primates

A recent study by University of Michigan paleontologists Thierry Smith, Ken Rose and Philip Gingerich in the Procedings of the National Academy of Sciences has given unprecedented temporal resolution to the biogeographic first appearence of early Eocene primates. The research centers on the primate genus Teilhardina, recognized as one of the first true primates to appear in the fossil record. It was first discovered in Belgium in 1927 and originally described as belonging to the fossil genus and species Omomys belgicus by famed theologian and paleontologist Teilhard de Chardin. In 1940 Gaylord Simpson attributed the material to a new genus and species given the honorific nomen Teilhardina belgica. In 1970 a similar species, Teilhardina americana was described from early Eocene deposits in Wyoming. Then in 2004 an Asian form, Teilhardina asiatica, was discovered from the earliest Eocene (~55 mya) of the Hengyang Basin, China.

The skull of Teilhardina asiatica sp. nov. (IVPP V12357). a, Dorsal view of the skull. b, Reconstruction of the skull based on IVPP V12357, with grey shadow indicating the missing parts. Scale bar, 5 mm.

The earliest true primates (i.e. euprimates) have been sorted into two seperate groups; the omomyids and adapids. The omomyids have long been thought to be ancestral to later haplorhine primates (tarsiers and anthropoids), while adapids have been seen as broadly ancestral to later strepsirhine primates (the living lemurs and lorises). As the most primitive known omomyid, Teilhardina appears to be close to the last common ancestor of these two early groups of euprimates. 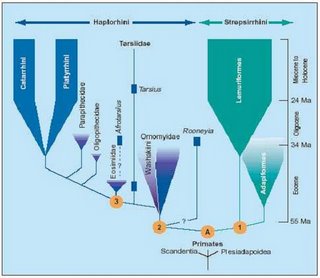 Teilhardia seems to fit in near the base of the primate family tree close to numeral 2 on the figure above
What Smith et al. have succeded in doing is sequencing the first appearence of the three regional species of Teilhardina. This has been determined by studying the carbon isotope ratios of deposits that have yielded the fossils in their respective regions. According to a UM press release:

To achieve such precision, they used a carbon isotope curve recently documented on all three continents. Carbon in the atmosphere, earth and living organisms differs in the proportion of carbon-12 and carbon-13 present. A flood of carbon- 12 is associated with the onset of an event known as the Paleocene-Eocene thermal maximum (PETM), one of the most rapid and extreme global warming events recorded in geologic history. It was during the PETM that modern primates first appeared 55 million years ago. Teilhardina in Asia precedes the maximum flood of carbon-12, Teilhardina in Europe coincides with it, and Teilhardina in North America appears just after the maximum.

The most likely scenario has Teilhardina, and hence the omomyids in general, originating in Asia and quickly dispersing first to Europe and then across northern Laurasia to North America. The earliest adapid primate, Cantius, is currently known only in Europe and North America from slightly younger deposits than Teilhardina. The presense of adapids in Asia is problematical and still largely unresolved. Nevertheless, the current study confirms that the earliest true primate in the fossil record is from China, pointing to a possible Asian origin for the euprimate radiation.

Is there other evidence pointing to an Asian origin for primates? In a word, yes. Recent molecular studies indicate that modern placental mammals can be divided into four major clades: Afrotheria, Laurasiatheria, Xenarthra and Euarchontaglires. These groups seem to have biogeographic significance. Afrotheres include living orders of mammal that are primarily indigenous to Africa, such as elephants, manatees, hyraxes, aardvarks and some small insectivorous forms. Xenarthrans are the sloths, giant anteaters and armadillos indigenous to South America. Laurasiatheres include virtually all other placental mammals (various ungulates, cetaceans, bats, carnivorans, insectivores, etc.) and seem to have had an origin in the northern hemisphere Laurasian supercontinent spanning North America Europe and Asia. Euarchontaglires is the most interesting of these supraordinal mammalian clades from an anthropocentric perspective. It includes primates as well as the closely related tree shrews (Scandentia) and flying lemurs (Dermoptera) in the subgroup Archonta, and rodents and rabbits in the subgroup Glires. The extant archontans, other than primates, i.e. the tree shrews and flying lemur are found exclusively in continental and insular southeast Asia. Rodents and Lagomorphs (rabbits, hares and pikas) are global in distribution, but some of the earliest rodents are known from the Chinese Paleocene, as are the anagalid ancestors of lagomorphs. The biogeography of extant and extinct members of the euarchantaglires clade thus suggests East Asian and/or southeast Asian origins. Another indicator of East Asian origins for the primates, in particular, is the presense of the earliest anthropoid-like primates, the eosimiids, from the middle Eocene of China.

As things now stand a persuasive argument, based on biogeographic, molecular and fossil evidence, can be made for the Asian origins of euprimates, as well as other euarchontaglires, during the late Paleocene.