For all you Lufengpithecus freaks out there in cyberspace I happened upon this photo of the Baoshan Lufengpithecus mandible while surfing the Chinese web. It’s the only photo of this poorly documented specimen that I’ve come across. 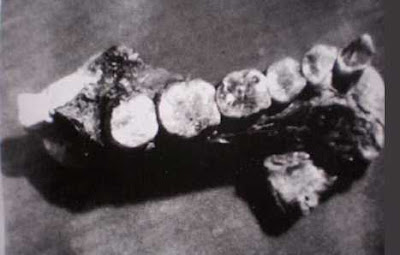 The one Chinese language academic reference I have regarding the Baoshan mandible is: “Geng, D. (1994). The position of the Baoshan hominoid fossil in the study of human origins. Yunnan Soc. Sci. 1994(1), 78–83.” The article details the domestic and overseas reporting of the find, the circumstances surrounding its discovery and the geographical location of the site. It also offers a brief description of the specimen and discusses its evolutionary significance. The most comprehensive English language summary of the site is given by Terry Harrison, Ji  Xueping and Denise Su, in their article “On the systematic status of the late Neogene hominoids from Yunnan Province, China, Journal of Human Evolution Volume 43, Issue 2, August 2002, Pages 207-227.” They offer a description of the site location and its biogeochronological placement based on the information given in Geng’s article, but they don’t have any discussion of the specimen itself other than what it consists of. I’ll take the liberty of quoting the material from their article that relates to Baoshan:

Yangyi, Baoshan
The hominoid locality of Yangyi in Baoshan Prefecture is located  350 km west of Kunming. The locality is situated on the eastern slopes of the Gaoligongshan mountains, between the Nu River and the Lancang River, and is the most westerly hominoid locality in Yunnan Province (Figure 1). In 1992, Xu Qinghua of IVPP discovered a left mandible fragment with C–M3 of a female hominoid in the uppermost lignite layer of the Qingshuigou coal mine at Yangyi. The specimen has not yet been formally described, but several news articles and reviews have made reference to the discovery (Xu, 1992; Geng, 1994; Zhang, 1994). The age of the Yangyi deposits has not been reliably established. Based on the associated proboscideans, the Yangyi fauna is suggested to be younger than the Lufeng and Xiaohe faunas (Yunbo, 1975; Jiang et al., 1983; Zong et al., 1996). It corresponds well with other Pliocene faunas from China, including that from the Shagou Formation, Yuanmou Basin [which has an estimated age of _3–4 Ma, based on paleomagnetic correlations (Jiang et al., 1989; Urabe et al., 2001)] and the Yushean aged fauna from northern China (correlated with the Ruscinian and Villanyian in Europe, MN 14–16, 5·2–2·6 Ma) (Qiu & Qiu, 1995). If an estimated age of 3–5 Ma is confirmed, the fossil primate from Yangyi will be, with the exception of Gigantopithecus, the youngest known representative of an extinct hominoid genus from Eurasia (Figure 3). 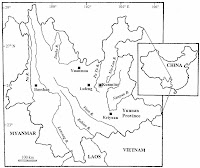 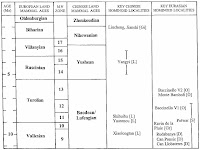 Geng’s article goes further in discussing some of the background to the Baoshan hominoid discovery and a brief description of the specimen and its significance. A brief summary translation follows.

Baoshan Fossil Ape - Baoshan history: in ancient times the western region of Yunnan Province was regarded  as "a boundless uninhabited wilderness." In the 1980s and 90s archaeological discoveries confirmed that primitive Paleolithic and Neolithic humans lived and bred there and carried out a broad range of activities. Ape fossils found in the Yangyi region of western Yunnan  caused quite a stir both internationally and domestically.

Yangyi is located 30 km southeast of Baoshan City, Yunnan Province, in a 2 sq. km sub-basin on the south side of Baoshan Dam. On January 9, 1992, ape fossils were unearthed from a coal seam at the Qingshuigou Mine north of Yangyi Dam, in Baoshan City,Yunnan Province. Fossils included the left mandible and a single premolar of an ape and some fossil herbivores, primates and other mammalian specimens. The jaw preserves intact six teeth, the canine, two premolars, and three molars. It is very rare that the jaw and teeth are so well preserved, unlike ape fossils excavated in the past both domestic and foreign that are mostly flattened, twisted, fractured or even completely broken. This lower jaw is very complete and provides a reliable basis for study. One of the most important traits in the transition from ape to human is the shape of the mandibular first lower premolar. In apes it is triangular and fan shaped with a single sharp tip. In humans it has two cusps that are nearly equal in size. The Baoshan 1st lower premolar is changing from a single cusped fan-shaped tip to a bicuspid tooth with one large and one small tip but not to the point in which the cusps are equivalent in size as in humans. The Yangyi specimen is similar in size, shape and other aspects to the 8 million year old ape fossils from Lufeng in Yunnan.  The Yangyi samples are similar to those from Lufeng, but the second and third molar crown width has become shorter and the third molar in particular has become shorter in width. This is more evolved than in Lufeng and closer to the condition seen in the 4 my old australopithecines. The morphological features and stratigraphic position of the fossils unearthed show that their age is between 8-4 million years ago. This is a period in the evolution from ape to human both in China and abroad that is lacking in fossils. Over the last 10 years there has been a concerted effort both at home and abroad to fill in this gqap. The Baoshan. Yangyi ape fossils help fill in this gap and show that Yunnan was an important area in the transition from ape to human.

The Baoshan site is the fourth Lufengpithecus site known in Yunnan. The four sites include in chronological order (based on the most recent dates): Kaiyuan (~11 mya), Yuanmou (~ 8 mya), Lufeng (6-7 mya), and Baoshan (~ 3-4 mya). There are definite differences and similarities between specimens from these sites.

As the Yangyi, Baoshan mandible may be (conservatively) comparable in age to Ardipithecus ramidus I thought it would be interesting to compare the two. What follows is a side-by-side comparison of the Baoshan lower mandibular tooth row (C-M3) to the same sequence from Aramis. 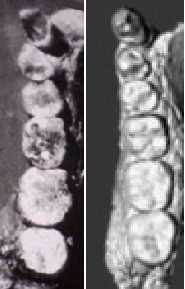 The Baoshan Lufengpithecus is to the left, Aramis Ardipithecus to the right (not to scale). I'll let readers draw their own conclusions. But, let me just say this. If the Baoshan mandible had been found in East Africa from comparatively dated deposits would it be considered anomalous or a good example of any early hominin (to use the current jargon)?