A Chinese Ape in Our Ancestry? Part 2

In an earlier post I reported on the basicranium of Lufengpithecus lufengensis as described in a 2008 monograph. The basicranium illustrated comes from the crushed male cranium of specimen PA 644. There are also complete but crushed basicrania of a juvenile specimen PA 844 (left) and a female specimen PA 677 (right). These can be seen in the following plates, but they haven’t been configured in a fashion to make their traits readily discernible and they haven’t been described in detail, so its very difficult to confirm the placement of the foramen magnum as in PA 644. Nonetheless, there is more than enough morphology present to eventually allow for a computer assisted reconstruction of both specimens. 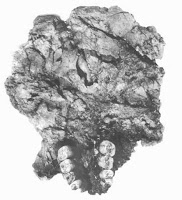 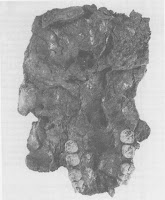 There is, however, another specimen that comes into play that has not received the attention that is warranted. It is a well-preserved male left proximal femur (PA 1276) that is configured in the 2008 monograph. On first glance it looks remarkably similar to the proximal femur of  Orrorin which has been put forth as conclusive evidence for bipedalism and hominid (s.s) status in that taxon. Below is a comparison of the L. lufengensis proximal femur (left) and Orrorin's (right).

Next I'll review a suite of craniofacial traits that show Lufengpithecus to be more African ape-like than Asian ape-like.