The Yunxian hominans are represented by two complete crania discovered in 1989 in Yun County (Yunxian), Hubei Province. Although crushed and distorted to varying degrees they are the most complete early middle Pleistocene hominan crania known. They preserve intact the face, cranial vault and cranial base and as such are extremely important materials for assessing the amount of variation in local paleodemes, and regional populations of Pleistocene hominans. They also serve as an invaluable resource for evaluating the amount and character of polytypic variation in archaic hominans. A conference celebrating the 20th anniversary of the discovery of the Yunxian crania will be held in China in early June. I'll be presenting a paper at the conference proposing a multiple dispersal hypothesis for interpreting hominan evolution in China and elsewhere.

This idea was broached in our initial article on the Yunxian hominans that appeared in Nature. In it we concluded, 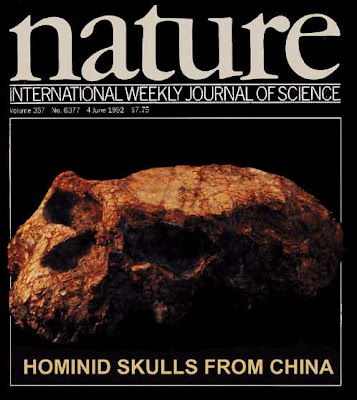 "The new evidence of fossil hominid variability in east Asia afforded by the Yunxian crania indicates that Middle Pleistocene hominids were highly polytypic and regionally differentiated, perhaps even at the demic level. But the differential distribution of character states associated with H. sapiens in regionally disparate Middle Pleistocene human populations suggests that the events leading to the emergence of modern humans were not restricted to one region of the world alone. In addition, the mix of characters in the Yunxian crania demonstrates that the taxon H. erectus is founded on a set of ancestral hominid traits and regional polymorphisms. It hence has no meaning in a cladistic framework. In light of these considerations we feel that it is best to view all Middle Pleistocene hominids in a broad perspective as an essential part of one evolving lineage in direct ancestry to modern humans."

We still adhere to the basic conclusions reached above which infers that all middle Pleistocene hominans should be recognized as belonging to a single species. In the ensuing years, however, it has become accepted by many that there were multiple hominan lineages throughout the Pleistocene that should be recognized at the species level. Modern evolutionary biology does not require complete cross-species genetic isolation for separate species to be recognized in a closely related species clade. Gene flow via hybrid zones and genetic introgressions between closely related species is well established. Coupled with persuasive evidence for the recent out of Africa hypothesis for modern human origins a number of Pleistocene species of the genus Homo are now recognized. These are generally restricted to hominan lineages in western Eurasia and Africa, representing the ancestors of Neanderthals in Europe and modern humans in Africa. Hence H. ergaster is proposed as a basal, ancestral taxon that gave rise to H. antecessor in the West and H. erectus in the East. H. antecessor in turn gives rise to H. heidelbergensis/H. neanderthalensis in Europe and H. rhodesiensis/H. sapiens in Africa. If the same methodology is applied to the Asian fossil record a whole different set of taxa can be proposed. If this cladistic scheme is accepted the Yunxian hominans seem to play a pivotal role bridging the gap between East and West. Given their early age and geographical placement it is hypothesized that they serve as a good source for later western archaics that eventually gave rise to European Neanderthals and African moderns. The abstract for our paper appears below:

Abstract: China has historically been a proving ground for alternative hypotheses of hominan evolution. During the mid 20th century its human fossil record was touted as persuasive evidence for a model of genetic continuity across grade transitions, culminating in the emergence of modern humans in regional contexts. More recently, the same record has been posited as evidence for the replacement of regionally dispersed archaic humans by African derived anatomically modern Homo sapiens. There is, however, yet another perspective. It proposes that the evolution of the genus Homo, since the late early Pleistocene approximately 2.0 mya, was characterized by multiple pulses of human dispersal out of Africa, and subsequent reticular evolution of emergent hominan lineages. This latter proposal relies on evidence from the sequencing of modern and ancient MtDNA, the Y-chromosome and the autosomal genome, combined with research into the population genetics and biogeography of a variety of extant primate species, and a recalibration of the human fossil record based on new dates for key specimens. It is hypothesized that these extra-African dispersals, associated with genetic bottlenecks and drift, as well as vicariance events and gene flow between various regional hominan paleo-demes, via hybrid zones, genetic introgressions and selective sweeps; can account for the transitions seen in the hominan fossil record of China and elsewhere. In this scenario an extra-African dispersal is responsible for the initial late early Pleistocene (ca. 2.0 mya) peopling of Eurasia by the transitional “habiline grade” species H. georgicus (part of a species clade including the Dmanisi remains from the Republic of Georgia and, perhaps such far-flung Sundaland paleo-demes as H. palaeojavanicus, H. modjokertensis, and the much later relic species H. floresiensis from the Indonesian island of Flores). Members of this species clade may also be responsible for early middle Pleistocene lithic assemblages in the Nihewan basin of northern China and the as yet poorly documented early middle Pleistocene hominan presence in southern China. This is followed by the early middle Pleistocene (ca. 1.65 mya) Eurasian dispersal of H. ergaster and the subsequent transcontinental radiation of an “erectine grade” species clade, including H. leakeyi in Africa, H. antecessor in Europe, H. erectus in Java, and H. lantianensis in China. At approximately 1.0 mya it is hypothesized that H. lantianensis gave rise to H. pekinensis in northern China and H. yunxianensis in southern China. The back migration of H. yunxianensis to western Eurasia, approximately 600,000 ya, is hypothesized to have led to the vicariance of the archaic species clades H. heidelbergensis/neanderthalensis in Europe and H. rhodesiensis/helmei/sapiens in Africa, replacing H. antecessor and H. leakeyi, respectively. The emergence of archaic (pre-modern) humans, H. mapaensis in South Asia and southern China, and H. daliensis in northern China at approximately 400,000 ya is hypothesized to be the result of in situ rectilinear evolution and gene flow from modernizing archaic populations further west. This is followed by a proposed African dispersal of H. sapiens idultu (AMHs) into the Levant, South Asia and East Asia, commencing approximately 120,000 ya, with the subsequent hybridization with, or replacement of, archaic hominans by anatomically modern but behaviorally pre-modern humans in India and China. Finally the dispersal of behaviorally modern H. sapiens sapiens (BMHs) out of Africa, beginning approximately 60,000 ya, led to the emergence of fully modern Chinese hominans by approximately 35,000 ya. These sequential dispersals, vicariances, and subsequent transitions, cum replacements in the fossil record, can account for the refashioning of the human genome in east Asia along increasingly modern lines, culminating in a demographic shift towards parameters consistent with a recent “out of Africa” hypothesis, while accommodating a certain degree of genetic admixture and morphological continuity throughout the history of the human presence in East Asia. 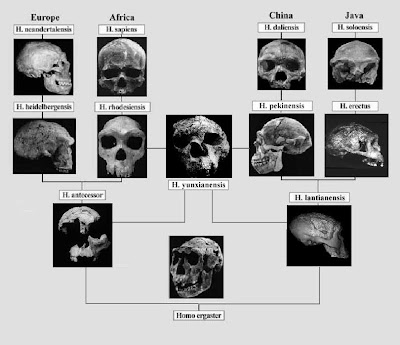 Researchers say they have identified the first example of a bone - not stone - hand ax crafted by ancient humans in East Asia. Makers of the curved, pear-shaped implement probably used it to dig up edible roots in a densely vegetated part of South China around 170,000 years ago, say paleontologist Guangbiao Wei of China Three Gorges Museum in Chongqing and his colleagues.