Of Rock Rats and Drunken Apes

The Laotian Rock Rat (Laonastes aenigmamus) was first described scientifically in April 2005 and identified as a member of an entirely new family of mammals.

It gained international attention again on March 10, 2006 when scientists published a paper in Science magazine re-identifying the animal as a member of the Diatomyidae, a family of rodents that had been previously thought extinct. Laonastes is thus a “relic species” or "living fossil" whose last known relatives lived 11 million years ago.

As Mary Dawson and Chris Beard, paleontologists at the Carnegie Museum of Natural History, stated:

Diatomyids are rodents that lived during the middle Tertiary (34 - 11 million years ago) in southern Asia, central China, and Japan. They were rodents of medium size and highly characteristic molar teeth and jaw structure. Three known fossil genera- Fallomus, Diatomys, and Willmus- are recognized in the Diatomyidae. Some fossils are known from isolated teeth and jaw fragments. Others such as Diatomys are better known and more widely distributed.

Laonastes is in fact so similar to Diatomys that details of the morphology of the former were predicted by reference to the latter. Accordingly, when Chinese paleontologist Li Chuankui, who originally described the genus, recently discovered a new species of Diatomys it showed a remarkable degree of similarity in its skull, tooth and jaw structures to the living Laonastes.

The type species of the Diatomyidae, Diatomys shantungensis, was first described in 1974 by Prof Li Chuankui from the well known early Miocene site of Shanwang in Shandong province, China. Shanwang is of special interest because of the prolific nature of its fauna and flora and the unprecedented state of preservation of its fossils, found in a very fine-grained diatomitic lacustrine depositional environment. The site has thus become the type site for the Chinese early Miocene. As we shall see, this is of particular interest to students of primate evolution.

Sihong, in Jiangsu province, is another important fossil bearing site. First found in the 1950s it was initially thought to contain an early Pleistocene fauna. Reevaluation of the original specimens and additional discoveries led to recognition that the site was contemporary with Shanwang and represented a similar paleoecology. In this regard it is interesting to note that Diatomys shantungensis is known from both sites.

Though relatively unheralded, Sihong is an extremely important site from a paleoprimatological perspective. Geochronologically both Shanwang and Sihong are now recognized to be of early Miocene provenience, ~ 17 mya. Given the abundance of fossil mammals recovered at Shanwang it was always a dream of Chinese paleontologists that fossil primates, in particular fossl hominoids, might eventually be found there. Alas, to this date no primate material has been forthcoming from Shanwang. The more southerly, contemporaneous Sihong site has, however, more than fulfilled the hopes of not only Chinese paleontologists, but paleontologists worldwide, with the recovery of a significant primate fauna, including what are arguably early protohominoids similar to the proconsuline protoapes of East Africa and/or the proto-gibbon-like pliopithecids of Miocene Europe. 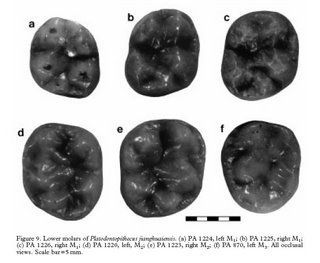 Lower molars of Platodontopithecus from the early Miocene site of Sihong, Jiangsu, China (from Harrison and Gu, 1999)

The placement of protoapes in East Asia at the same time they appear in East Africa is a challenge to commonly held beliefs about the exclusivity of Africa as the homeland for the catarrhine and hominoid adaptive radiations and speaks to the fact that the biogeographic distribution of primate groups in the late Paleogene and early Neogene is much more complicated than previously thought.

It is in this manner that the discovery of the Laotian Rock Rat gains added significance. As a relic of the early Miocene Shangwangian biochronologic age, Laonestes opens up a window on this long gone epoch, when early ape-like creatures may have spread throughout south, east and southeast Asia. What relationship these early protoapes (represented until now mostly by isolated teeth and some scrappy jaw fragments) have to the later appearance of true modern apes in the same region during the Middle and Late Miocene (7-12 mya) is a topic that has garnered little attention. Only with the recovery of more diagnostic elements of the cranial and post-cranial skeletons of these early apes will their relationships to other primates become better understood.

Shangwangian-like faunas are, however, found spread throughout south, east and southeast Asia during the early Miocene, so we can tentatively assume that the protoapes of Sihong had a similar distribution (for that matter, one primate taxon from Sihong, Dionysopithecus, named after the Greek god of wine, has been found in Pakistan).

The Diatomyidae, the family to which the Laotian Rock Rat has been assigned is described by Qiu and Li as follows:

DIATOMYIDAE: Diatomys shantungensis, collected from Shanwang and Sihong, is the only Chinese species of this family. Diatomys was first considered indeterminate to family and questionably referred to Geomyoidea (Li, 1974). Some students transferred it to the family Pedetidae (McKenna and Bell, 1997). We follow P. Mein and L. Ginsburg (1997) in their definition of a new family for this genus plus probably Fallomus. Diatomys is also known from Thailand, Pakistan, and Japan (Kato and Otsuka, 1995), and appears to be a kind of wet/warm-adapted animal distributed in a tropical or subtropical area.

This suggests that the environment in which modern Laonestes is found is a biological refugia and good analog to what the environments of Shanwang and Sihong may have been like 17 million years ago when protoapes roamed the forests of East Asia.