A Species Odyssey: A New Form of Scientific Creationism 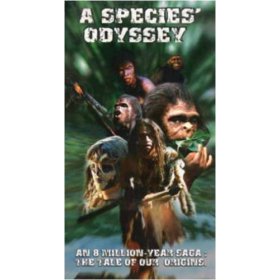 Happened to see a two part series on the Science Channel recently called "A Species Odyssey." It attempts to portray the course of human evolution from the earliest purported "hominids" such as "Toumai" and "Orrorin" through to the demise of the Neanderthals and the emergence of modern humans. It is done in a dramatic, narrative style using state of the art animatronics to depict proto-human ancestors and various extinct mammals, and actors with fanciful make-up to simulate how more human-like ancestors may have appeared.

Although the series tries to present the saga of human evolution from a science-based perspective, the science behind it is, unfortunately, all wrong. I was astonished by the license the producers took with the known fossil record.

The opening scenes focus on a troop of proto-hominids, called alternatively either monkeys or apes, who are faced with an increasingly desiccated east African environment, leading to the retreat of their forested refugia and the spread of more foreboding savannah grasslands. In response, individual apes meet the challenge by standing upright and taking the first bipedal steps. This is presented in an episodic fashion leaving the impression that evolution proceeds by quantum leaps and willful intent. In point of fact, the so-called "savannah hypothesis" of bipedalism has been abandoned by nearly all researchers over the last twenty years. It is now widely accepted that bipedalism emerged in the forests not out on the savannah. The shift to an open grasslands adaptation occurred millions of years later with the advent of the genus Homo.

In this same sequence the first "hominid" is depicted as some sort of "hopeful monster," born to a pair of retrograde apes, sort of like the baby Jesus born to redeem a bestial past. This sequence sets the almost Biblical tone of the next two hours and is as false a notion as any creationist screed concerning human origins that I've ever encountered. In these videos natural selection and evolutionary adaptations just simply happen sui generis. Confront an ill-adapted vulnerable hominid with an environmental challenge, give it the will to survive and presto the new physical or behavioral trait appears, deus ex machina, almost instantaneously. This series and many other popular accounts of human evolution and evolution in general seem to have an inherent tendency to see evolution in volitional and teleological terms. The bad science that this projects and the naive and corrupted version of evolution thus presented become grist for the mill of ID creationists who can use these mischaracterizations of evolutionary theory to validate their own preconceptions and misrepresentations of what evolutionary biology is all about.

This really becomes an unintended form of scientific creationism cast in a secular mold. There is a mythic, almost otherworldly aura surrounding the emergence of various human adaptations throughout the videos. These are none other than scriptural-like recountings of key human innovations, more or less akin to culture hero creation stories found in nearly all human societies. It may make for good or bad theater but not science, and to my mind does a grave disservice to developing a true understanding of the evolutionary process.

In addition to this fundamental misconception of how evolution actually takes place, the series is replete with plain and simple factual errors. One glaring mistake is to unequivocally state that two species of australopithecine, Austalopithecus afarensis and Australopithecus anamensis co-existed and were competitors. This is simply not true, "anamensis" preceded "afarensis" in the fossil record and most anthropologists see it as the latter's direct ancestor. The purported behavioral differences between these two species shown in the video are without any foundation and totally made up out of whole cloth.

I could go on and on about all the factual errors and mistakes made in this production. Not only do they give a distorted picture of human evolution, but they also play into the hands of critics of human evolutionary research as they perpetuate false claims and notions that become straw men for creationists to attack.

One major theme throughout the series is the idea that there were primal conflicts between different species of prehuman. These species however are portrayed more or less as rival gangs along the lines of Canaanites versus Isrealites. There is no understanding of the biological species concept and the various species of hominid are shown interbreeding at will. 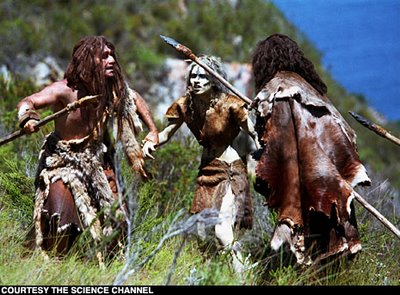 An encounter between Neanderthals and a modern human female
The reverential and naive narrative comes across as almost religious in tone, as if the producers were consciously trying to create a new secular version of Genesis. Moreover, the depiction of human ancestors also leaves me cold. Although some of the graphics are well done, the way early humans are shown moving about their environs is very stilted and unrealistic.

In sum, much of this series is totally fabricated and only vaguely reflective of what we really know about human evolution. In my opinion it does much more harm than good. A dramatic series of this sort could be done in a truly scientific manner that is consistent with what we really know, rather than in the bowdlerized fashion given here.

Comments:
you seem to have glane only one error in this video. the fact that two ancestor species coexisted in Africa, and tou say there is a lot of mistake. only one, that's not a lot. and it's a point of view.

if you see "Homo Sapiens" another film from the same director, you will learn that homo spapiens (we) and homo erectus (our ancestor) coexisted in Jakarta. It's not a mistake, but a real fact from dated skeletons.
those two species simply coexisted on earth.

I have been reading and looking for some information and it is amazing and disturbing how many blogs related to Buy Viagra, Viagra, Generic Viagra are in the web. I know that they are products that many people use and need, but it is funny to watch so many information about those products. Anyway your inputs for this subject are very interesting.