Rethinking the Role of Pliopithecids in Hominoid Evolution

The pliopithecids are some of the most enigmatic fossil primates, long thought to be gibbon ancestors. They boast, however, a series of primitive dental, cranial and post-cranial features that have led many to doubt their earlier assumed hominoid affinities and ancestral gibbon status. Some go so far as to suggest that they predate the emergence of the catarrhine crown group and are a continuation of an ancestral anthropoid clade that evolved convergently with modern catarrhines.

On the other hand, relatively complete cranial remains attributed to pliopithecids in both Europe (Epipliopithecus vindobonensis) and China (Laccopithecus robustus) bear an uncanny resemblance to modern gibbons. Can it be that pliopithecids have been given a bad rap? I will argue in this post that regardless of their primitive morphological features the place of pliopithecids in hominoid phylogeny should be reconsidered based primarily on biogeographic and biochronologic grounds. 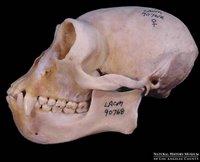 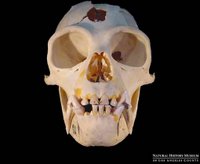 For instance, molecular studies indicate that the last common ancestor (LCA) of living hominoids, including the lesser and greater apes may have existed as recently as 15 mya. This date is consistent with a 6 million year old molecular age for the chimpanzee/human LCA and a 12 million year old molecular age for the LCA of the Asian orangutan and the African apes and humans. These dates are in accord with the fossil record which has protohominid ancestors of the australopitecines such as Sahelanthropus and Orrorin appearing 6-7 mya, orangutan-like Asian apes such as Sivapithecus emerging ~ 12 mya, and gorilla-like European ancestors of African apes such as Ouranopithecus appearing slightly later (see my previous posts on homind origins here and here). It can, therefore, be legitimately argued that ancestral gibbons should occur in the fossil record around 15 mya. 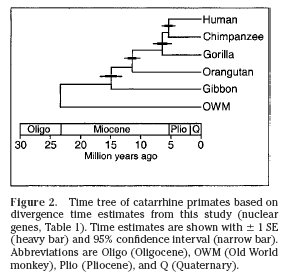 As argued previously there is what might be called a phylogenetic node of approximately 1 to 2 million years duration that can be hypothesized to surround any given primate LCA. That is to say, it should be virtually impossible to distinguish the immediate predecessor and the immediate successors of an LCA from the LCA itself, particularly when dealing with a fragmentary fossil record dominated by extremely liable dental remains. Factor into this picture the potential for homoplasy amongst primates (i.e the frequency of parallelisms and convergences between primate lineages) and we get an extremely complex evolutionary matrix.

It can be argued, for instance, that the last common ancestor of the living hominoids may have retained a suite of primitive features lost in parallel by its living descendants. It can also be argued that many traits thought to be shared derived features of living hominoid taxa, such as a suspensory locomotor adaptation, likewise evolved in parallel. As regards extant hylobatids (i.e. the living gibbons and siamangs) it can be further argued that some of their uniquely derived features, such as their adaptation for extreme brachiation abilities and lack of body-size and canine-size sexual dimorphism evolved relatively recently and should not characterize stem hylobatids (that is hylobatid ancestors occurring prior to the LCA of living gibbons and siamangs which arguably lived relatively recently within the last 3-4 million years).

With all these caveats in mind how then can the hominoid LCA be recognized in the fossil record? First off, it should have all the primitive features retained by the living hylobatids vis-à-vis the great apes and humans, such as a fenestrated palate. Secondly, its retention of other primitive features, lost in all living hominoids, should not preclude it from being the LCA or close to it. Thirdly, the appearance of features seen in some hominoids but lost or transformed in hylobatids should also be expected (i.e. ancestral gibbons may not have been suspensory brachiators and they were most assuredly highly sexually dimorphic). Finally, and perhaps most importantly, recognition of secular temporal trends leading from a primitive ancestor to more and more derived descendants showing an increasing accretion of gibbon-like features through time, can serve to link highly derived extant hylobatids with primitive ancestors in the fossil record.

Let’s illustrate a possible interpretation of pliopithecids as hominoid cum hylobatid ancestors in light of the above considerations. Firstly, most researchers discount pliopithecids as hominoid ancestors because they possess a suite of pre-catarrhine-like features seen in both prosimian and platyrrhine primates, but lacking in living and extinct old world monkeys and apes. Pliopithecids are also distinguished by possession of uniquely derived features not seen in other anthropoids, in particular the so-call pliopithecine triangle on the occlusal surface of their lower molars. Finally, those features that they share with modern gibbons are said to be either primitive retentions or homoplasies of little or no phylogenetic significance. These are all powerful arguments against the hominoid affinities of pliopithecids.

But let’s look at these data through the prism of secular evolutionary trends amongst pliopithecids and hylobatids. The earliest and most primitive pliopithecids are now known from Asia. In particular, the primate fossil taxa Dionysopithecus and Platodontopithecus from the early Miocene site of Sihong in Jiangsu, China discussed in my last post, are now widely regarded as the base of the pliopithecid adaptive radiation. Slightly later, the classic pliopithecids of Europe make their first appearance. The apparent Asian origin of pliopithecids is in keeping with the previously discussed possibility that the primates themselves had Asian origins and the evidence for the Asian origins of the anthropoids per se, to be discussed in a future post.

This is where biogeographic and biochronologic considerations come into play. Both gibbons and orangutans are found exclusively in Asia. Molecular data place the LCA of living hominoids between 15-17 mya. It seems logical then that the hominoid LCA should be found in Asia between 15-17 mya and, lo and behold, there are candidates in the guise of Dionysopithecus and Platodontopithecus. But isn’t it a stretch to argue that these scrappy specimens are close to the hominoid LCA when Africa is replete with abundant protocatarrhines and protohominoids from the earliest Miocene, preceding the Sihong material by millions of years? According to the argument presented here, the African finds may merely be fortuitous and could represent either an ultimate source for the Asian LCA of the hominoids or collateral protocatarrhines that dispersed earlier from Asia to Africa and eventually went extinct without issue.

Let’s follow this line of argumentation a bit further. It is now generally agreed upon that the early pliopithecids, with a wealth of primitive features, are followed by more derived pliopithecids from the middle and late Miocene, placed in a subfamily called the Crouzeliinae. Most of the features distinguishing crouzeliines from pliopithecines (the earlier subfamily of pliopithecids) relate to minute dental features and will not be discussed herein. Crouzeliines, however, tend to shown a decrease in some typical pliopithecid features such as degree of expression of the pliopithecine triangle and an increase in post-cranial features relating to a suspensory locomotor adaptation, such as increased curvature of the phalanges.

The most recent member of the Crouzeliinae is Laccopithecus robustus from the late Miocene (~ 7 mya) Chinese site of Lufeng in the southern province of Yunnan.

Laccopithecus is one of the best represented plioipithecids. As David Begun, an authority on European pliopithecids states:

Laccopithecus robustus is known from a rich sample of about 90 specimens, including a partial cranium with a well-preserved face and palate, as well as a number of more fragmentary jaws, associated dentitions, isolated teeth and a proximal phalanx (Pan, 1998) ... Laccopithecus robustus is a medium-sized primitive catarrhine ... Females are close in molar size to siamangs, whereas males are somewhat larger ... There are no pliopithecine triangles on any of the lower molars and the buccal cingula are minimally developed ... Two damaged mandibular symphyses suggest that the anterior part of the mandible was robust with well-developed transverse tori while the posterior portion appears to have been relatively gracile in transverse dimensions ... The male upper canine is very large and strongly bilaterally compressed. All three upper anterior teeth in fact closely resemble their homologues in hylobatids, though this is not the case for the lower incisors, which are lower-crowned and broader in hylobatids. Another important distinction from hylobatids is the presence of sexual dimorphism in canine morphology, as in nearly all other anthropoids ... The cranium of L. robustus is badly damaged, as is the case for most specimens from Lufeng. The palate is narrow anteriorly, as in Epipliopithecus and it appears to have been fenestrated. As in Epipliopithecus, Anapithecus and Hylobates, the nasal aperture is tall but small and narrow overall, with a narrow base and an apex that reaches above the lower level of the orbits ... Finally, the single proximal phalanx of Laccopithecus is long and curved, with strong muscle markings suggestive of suspensory positional behavior (Meldrum & Pan, 1988).

The above is an abridged description highlighting certain secular trends relating features characteristic of primitive pliopithecids to features reminiscent of later hylobatids. What we see is the retention of primitive features (fenestrated palate) only seen in hylobatids amongst living hominoids, the loss of a derived feature associated with earlier pliopithecids (the pliopithecine triangle), the presence of a primitive character (canine and size sexual dimorphism) retained in the great apes but lost in extant hylobatids, and the enhancement of adaptations for suspensory movement in the trees.

Although still rather sketchy, an argument can be framed that the pliopithecids are the Asian root of the hominoid radiation and their Asian members represent a processional lineage leading from a Dionysopithecus/Platodontopithecus-like ancestor through the more advanced crouzeliine Laccopithecus to the modern gibbons and siamang of southeast Asia. Laccopithecus, which is in the right place and at the right time, thus becomes a crucial link between the pliopithecids and later hylobatids.