A recent post here at Sinanthropus discusses the relationship of primates to other mammals within a supraordinal clade called Euarchontaglires and their possible Asian origins. Euarchontaglires consists of two closely related groups: Euarchonta, including the mammalian orders Primates, Dermoptera (flying lemurs or colugos) and Scandentia (tree shrews), and Glires, including Rodentia and Lagomorpha (rabbits, hares and pikas). Until recently bats (Chiroptera) were usually included with the primates, flying lemurs and tree shrews in a group called Archonta. With the realization that bats are not closely related to other archontans the core archontans have been reformulated as euarchontans (i.e. true archontans). 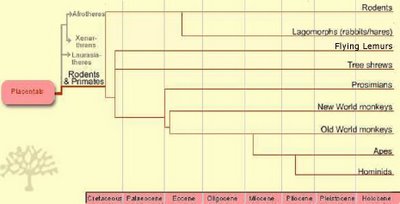 Darren Naish over at Tetrapod Zoology has a post on the controversy surrounding the suggestion that "flying foxes" or fruit bats are distinct from other bats (microchiropterans) and are actually close relatives of primates and other euarchontans. These megachiropterans or megabats are an interesting group that for a brief period in the late 1980s were thought by some to be so-called "flying primates." As Darren shows this view is no longer favored. Megabats are widely distributed throughout the equatorial latitudes of Southeast Asia, Australasia and Africa, as one would expect given their volent adaptation. While not apparently closely related to euarchontans it is interesting that megabats share the same biogeographic zone as the "flying lemur" and the tree shrew, along with the prosimian tarsier in insular southeast Asia, as well as a suite of neurological features with primates, a neat example of evolutionary convergence if there ever was one.