China is justifiably reknowned for remarkably preserved Cambrian fossils from the Chengjiang Lagerstätte that have been discussed here previously. Perhaps of equal significance are microscopic fossils recovered from the earlier pre-Cambrian Doushantuo Lagerstätte in Guizhou province to the northwest.

The Doushantuo Formation is dated between 590-565 mya. This is a period after the worldwide glaciation of "Snowball Earth" fame and before the onset of the Cambrian. It is known biochronologically as the Ediacaran and is characterized by enigmatic fossils that show only tentative links to later Cambrian phyla. Other Ediacaran fossils are idiosyncratic and perhaps did not survive in later biotas.

This post will summarize recent research on microscopic embryos from the Doushantuo Formation that preserve remarkable morphologic detail, both externally and internally. PZ Myers at Pharyngula has a number of posts regarding this material and I will defer to his expertise in discussing these finds. His first post simply introduces these microfossils and the fact that they actually are what they are said be be, unbelievably well-preserved microscopic fossil embryos from 570 mya! Research up to that point was merely able to describe the external structure of the embryos, including their stage of division, and other phenetic differences between them, suggesting that they represented a variety of life forms. What the adult organisms were like is still in large measure unknown, although some were, and still are, thought to be early bilaterian animals. This link gives a synopsis of the diversity of animaforms tentatively identified with the Doushantou phospherites. 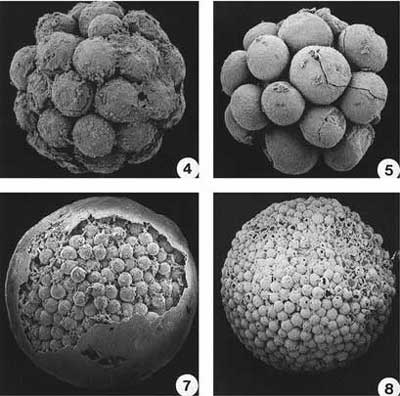 The second post at Pharyngula discusses recent work that helps elucidate exactly under what circumstances embryos of these sorts can be preserved. The research also explains why there seems to be differential survival of these organisms at certain prefered stages of development. The third post discusses the developmental biology of these early embryos and how it reflects a type of asymmetry seen in relatively sophisticated metazoan animals.

The final post is of greatest significance as it reports on recently published descriptions of the internal structure of similarly preserved embryos from the Lower Cambrian Kuanchuanpu Formation, in Shaanxi Province, China. The researchers used an advanced imaging technique called synchrotron-radiation X-ray tomographic microscopy (SRXTM) that allows for the unprecedented non-invasive analysis of the previously indeterminate submicrometre internal structure of phosphatized embryos. 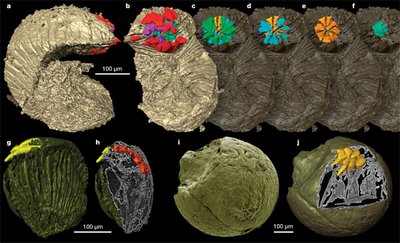 The scalidophoran Markuelia from the Cambrian of China and Siberia.

The recent study is concerned with early Cambrian fossil embryos assigned to the genus Markuelia, which turns out to be a stem Scalidophoran, a group of vermiform animals including the priapulid "penis worms". Although the article in the latest issue of Nature does not report on similar phosphatized specimens from the Ediacaran Doushantuo Formation referred to above, it does state that:

... together with evidence from comparative taphonomy, the case is now very strong for rejecting claims of anthozoan planula larvae, hydrozoan and bilaterian gastrulae, as well as minute adult bilaterians from the Ediacaran Doushantuo phosphorites.

This is an important statement as it was thought by many that certain specimens from Doushantuo assigned to a new genus and species Vernanimalcula guizhouena, were in fact the earliest bilaterian in the fossil record. The results of this latest study apparently place these earlier claims in doubt.

Vernanimalcula guizhouena , purported to be the earliest bilaterian fossil may need to be re-evaluated based on research results using synchrotron-radiation X-ray tomographic microscopy (SRXTM)

It will definately be interesting when this new technique is applied to the Doushantuo embryos.