More on the Pre-Cambrian Fossils of China

In my previous post I introduced readers to the pre-Cambrian fossil record of China. The Doushantuo Formation has garnered most attention, but there are other notable Ediacaran sequences in South China. These were the subject of a recent conference entitled: The Cryogenian and Ediacaran of South China: Ice Ages, Animal Embryos, Acritarchs, and Algae, held from June 6-16, 2006 in Beijing. Pre-Congress excursions visited major Neoproterozoic sites throughout South China. The following excerpts from the Congress program gives a feel for these exciting discoveries:

The Neoproterozoic is emerging as one of the focuses in the study of Earth system history. Recent progress in the study of Cryogenian and Ediacaran successions of South China has significantly expanded our knowledge about Neoproterozoic Earth system history. For example, the discovery of animal embryo and macroalgal fossils in the Doushantuo Formation and unusually preserved Ediacara fossils in the Dengying Formation provides key paleontological evidence for the evolution of multicellular eukaryotes. Recently acquired high-resolution radiometric ages from Cryogenian-Ediacaran successions of South China place critical constraints on the pace of early multicellular evolution. In addition, the occurrence of multiple Cryogenian glacial deposits and diverse Ediacaran acritarchs will help to clarify the global picture of Neoproterozoic climate change and biostratigraphic correlation. 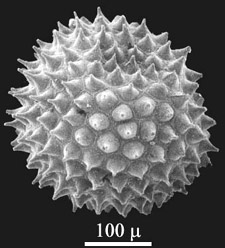 Macroscopic fossils from the Dengying Formation were recently described by Xiao et al.:

Ediacara fossils are among the oldest known macroscopic and complex life forms. Their bodyplan, ecology, and phylogenetic affinities have been controversial. On the basis of taphonomic observations, Seilacher [Seilacher, A. (1989) Lethaia 22, 229–239] proposed that the core elements of the Ediacara biota, the vendobionts, were constructed with serially or fractally arranged quilts or tube-like units. However, anatomy of quilt walls has been rarely reported, because most Ediacara fossils are preserved as casts and molds in siliciclastic rocks with inadequate morphological resolution. Here, we report an Ediacara form, uniquely preserved in situ and in three dimensions with its organic walls cast by early diagenetic calcite, from bituminous limestone of the 551- to 542-mega-annum Dengying Formation of South China. Despite diagenetic tampering, serial sections show that the Dengying form consists of biserially arranged, tube-like quilts, each with two vertical side walls, a floor, a roof, and an open distal end. Three-dimensional morphological complexity of the Dengying form excludes a microbial interpretation but is broadly consistent with vendobionts. Unlike classic frondose vendobionts sensu Seilacher, however, the Dengying form probably lacked a smooth margin and had distally open quilts. It probably lived procumbently at or near the water–sediment interface and shows evidence for substrate utilization. Despite its uncertain phylogeny, ontogeny, and functional biology, the Dengying form adds to Ediacaran biodiversity, places key constraints on the ecology and extinction of Ediacara organisms, and points to the need to explore an alternative taphonomic window for Ediacara biology. 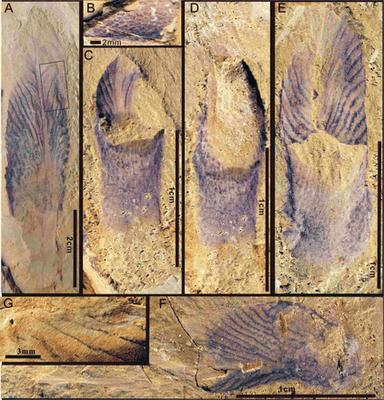 The vendobionts referred to above are frond-like life forms that were a major constituent of global Ediacaran biotas and appear to be among earth's earliest animals. Their relationship to Cambrian taxa has long been controversial, but the recent description of well preserved early Cambrian specimens from China, reviewed at Pharyngula, point to the possibility that they represent basal Ctenophores (comb jellies). If this analysis is upheld, it would be one of the first confirmations of an extant animal phylum having pre-Cambrian roots. 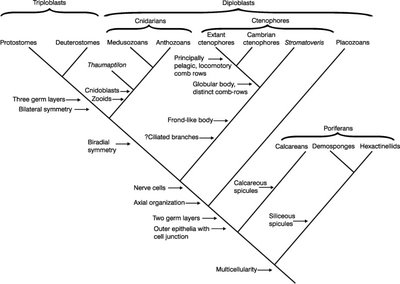