A Chinese Ape in Our Ancestry? Part 3

Lufengpithecus has generally been considered a primitive member of the Orangutan clade. The latest dating of the Lufeng site places it between 6.9~6.2 mya, or in the latest stage of the Late Miocene, well within the time span of the Last Common Ancestor (LCA) we share with the chimpanzee. But Lufeng is in South China, a region that had orangutans as recently as a few thousand years ago, and not East Africa, so its been assumed that Lufengpithecus is simply an ancestral orang of sorts. But how orang-like was it? Another hominoid from the Late Miocene of Lufeng, Laccopithecus is gibbon-like in many aspects of its craniofacial anatomy but has been identified as a pliopithecid, based on its dentition, by a number of specialists in hylobatid phylogeny. Pliopithecids are primarily European in distribution, so it would not be anomalous if Lufengpithecus turned out to be an intrusive element in the southeast Asian biozone in which its been found.

If we look at some basic features of the Lufeng cranium we can see that it has a number of plesiomorphic hominoid traits that are also retained in extant pongines. These include arched supraorbital costae rather than a horizontal supraorbital torus, a salient frontal trigone in males and a triangular lower face with anterior teeth (canines and incisors) oriented in a manner similar to those seen in the protohominoid Afropithecus (16-18 mya), which retains a whole suite of primitive catarrhine features. It can be argued, therefore, that the orang-like features seen in Lufengpithecus are primitive retentions that don't necessarily indicate an ancestor-descendant relationship between them. 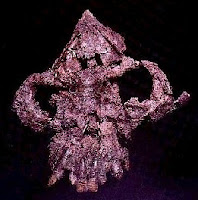 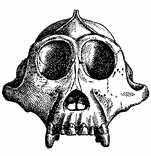 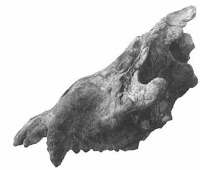 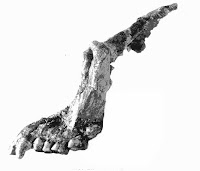 Afropithecus (left),  Lufengpithecus (center), Pongo (right)
On the other hand, Lufengpithecus has a number of traits usually considered characteristic of the African ape/human clade.These include retangularly shaped orbits, a broad interorbital distance, an African sub-nasal morphology with a relatively broad nasoalveolar clivus and double-barreled incisive foramina (rather than the narrow nasoalveolar clivus and slit-like incive foramen seen in orangutans), frontal sinuses, lachrymal fossae, infra-orbital foramina, enamel prism 3B pattern, and a long formation period of incisors, etc. Some of these traits are illustrated below: 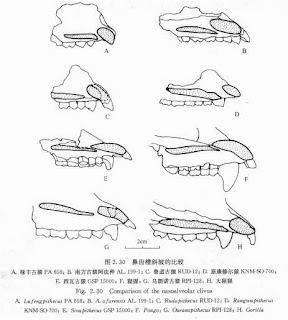 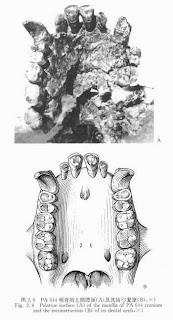 A case can be made, as the Chinese editors Xu Qinghua and Lu Qingwu do, that the total morphological package of Lufengpithecus is more like that of an African ape than an Asian ape. Moreover, based on the same criteria used by many paleoanthropologists to identify both Sahelanthropus and Orrorin as a hominid (s.s.), it can be argued that so is Lufengpithecus. This is the position taken by Xu and Lu. My thinking is slightly different. I think that the successive LCA's of the modern great apes, the African apes (including humans), and chimpanzees and humans, all had incipient adaptations for bipedalism that have been recognized as hominid (s.s.) autapomorphies when they are actually hominoid synapomorphies. Its interesting to factor Oreopithecus into this equation since it lived around the same time, in a similar environment and had adaptations consistent with some form of bipedalism, again suggesting that many traits considered to be derived in hominids (s.s.) are actually what should be expected in a variety of Late Miocene hominoids, including the LCA.

Next we'll look at the teeth and jaws of L. lufengensis