An Early Entry of Modern Humans into East Asia?

Until recently a lack of diagnostic human fossils in China between 30-120,000 ya created a significant lacuna in the record of human evolution in East Asia. The time span in question is crucial as it is during this period that genetic evidence suggests modern humans dispersed out of Africa to eventually populate the rest of the world. The question thus arises - how do the earlier erectine and archaic pre-modern human fossils from China relate to modern human populations there and elsewhere in East Asia?

Traditionally a strong case has been made that there is morphological continuity between earlier human populations and their modern counterparts in China. Thus, the model of “regional continuity” between archaic and modern humans in East Asia is a paradigm that has been widely accepted by those who specialize in Asian paleoanthropology. Until recently genetic evidence tended to contradict this hypothesis. For example, extensive study of Y-chromosome haplotypes in a sample of nearly 100,000 Chinese shows 100% possession of African derived mutations that emerged prior to the African diaspora of modern humans beginning approximately 75-60,000 ya, while extensive MtDNA research in China likewise shows a recent diversification of maternal lineages, precluding any significant contribution of archaic pre-modern paternal Y-chromosome or maternal MtDNA lineages to the modern Chinese gene pool. The MtDNA and Y-chromosome genetic loci, however, are not subject to recombination. Therefore, if any interbreeding between resident archaic Asians and dispersing moderns occurred ancient maternal MtDNA lineages and paternal Y-chromosome lineages could have been lost by pervasive lineage extinction. On the other hand, the possibility of hybridization between archaics and moderns could have led to the introgression of positively selected nuclear genes, which could have become imbedded in the modern human genome by selective sweeps

This possibility has been supported by a number of studies including the analysis of the worldwide distribution of single nucleotide polymorphisms (SNPs) and genetic microsatellites that indicate periodic hybridization and genetic admixture between local archaics and transient moderns in both the eastern Mediterranean and East Asia consistent with a late Pleistocene “Out of Africa” dispersal event and subsequent migration of moderns further east. Based on projected mutation rates and the relevant fossil record, it has been projected that episodes of interbreeding occurred approximately 60,000 years ago in the eastern Mediterranean and about 45,000 years ago in eastern Asia. These dates are consistent with the initial spread of H. sapiens out of Africa and later entry into East Asia.

Interbreeding between closely related species in hybrid zones is commonplace within the higher primates and can be inferred by genetic and population studies, blurring the distinctions between otherwise well defined groups. Other difficulties in defining species result from genetic drift and the resulting populational partitioning seen in wide-ranging species. Recent studies have revealed evidence of such deep population structure for both early modern humans in Africa and Neanderthals in Eurasia complicating the interpretation of extant genetic diversity. Deep population structure is often accompanied with incomplete lineage sorting, complicating the determination of extant species clades. Moreover, the dispersal of modern humans has been complex and may include episodic instances of back migrations and secondary dispersals into adjacent regions. Some deeply rooted haplotype trees for various genetic loci show a distinctive Asian pattern of distribution, suggesting either introgression from extra-African archaic hominan lineages or prior lineage sorting within the dispersing African population with retrogressive extinction of the sampled lineage in their continent of origin. These autosomal lineages have coalescence dates ranging from 1.8 mya to 160 kya indicating that archaic hominan populations in Asia may have undergone multiple periods of genetic drift (differentiation) and gene flow (consolidation), leading to a greater degree of genetic diversity with more deeply rooted genetic lineages than seen in globally distributed modern humans of today. The fact that haplogroup D of the microcephalin gene likely originated in Asia from a lineage separated from modern humans 1.1 mya and introgressed into humans by 37 kya, is consistent with the MtDNA data from the Denisova hominan and lends credibility to the possibility that the Denisova hominan is the result of admixture between modern humans and an East Asian population of archaics that samples the ancient population structure of East Asia.

There are, in addition, counter-indications in the fossil record that suggest an early extra-African dispersal of modern humans into East Asia. For instance, there is unequivocal fossil evidence of modern humans at Skhul and Qafzah in Israel dated to approximately 100,000 ya, tens of thousands of years prior to the genetic dispersal of the ancestor of all living moderns out of Africa, estimated to have occurred between 60-75,000 ya. Consistent with an early dispersal of AMHS out of Africa prior to the ancestors of living populations are a series of modern looking isolated teeth dated in excess of 100,000 years from a number of southern Chinese sites such as Xinglongdong in the Three Gorges Region; Mulanshan, Ganqiandong, Lunadong and Mohuidong in Guangxi; Huanglongdong in Yunxi, Hubei; Lianhuadong in Zhenjiang, Jiangsu; Zhangkoudong in Yiliang and Xiannrendong in Xuchou, Yunnan, the recently excavated partial cranium from Xuchang, Henan in central China dated to between 80-100 kya and the edentulous mandible from Mulanshan dated to 110,000 ya. This recently published East Asian evidence supports an early date for an initial dispersal of AMHS out of Africa around 120,000 ya. This would be an event independent of the later dispersal that gave rise to the spread of modern people in China represented by the human remains from Tianyuan, Hebei dated to ca. 34,000 ya.

While these finds of early modern humans in China are fragmentary they hold out the distinct possibility that there was an early extra-African movement of modern humans out of Africa prior to the dispersal event that gave rise to all living non-African populations. Perhaps this earlier dispersal occurred amongst populations that were still behaviorally pre-modern. If early moderns with a middle Paleolithic culture entered Asia as long ago as 120,000 ya, it raises the possibility that they interbred with the archaics they encountered. This is in full accord with recent comparisons of the nuclear genomes of Neanderthals and modern Eurasians which documents the admixture of archaic genes into the modern human genome in the Near East and East Asia. Behaviorally modern people who arrived somewhat later may have then interbred and ultimately replaced these hybrid populations.

Below is a photo of the recently published; edentulous mandible from Mulanshan, Guangxi dated to 110,000 ya (Jin, C. et al. 2009 The Homo sapiens cave hominin site of Mulan Mountain, Jiangzhou District, Chongzuo, Guangxi with emphasis on its age. Chinese Sci Bull. 54: 3848-3856.) 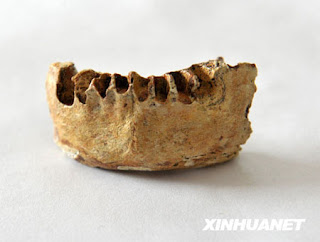 Comments:
So where does this place Multiregionalism vs Out of Africa? Some Chinese scientists believe that there is continuity between Sinanthropus and modern Asians (e.g. shovel shaped incisors, etc.). Weidenreich, et al, believed in something very different than the Out of Africa paradigm. Has the discovery of Neanderthal material in the Eurasian genome re-opened the case for a reappraisal of Multiregionalism?