The Juvenile Hominoid from Butterfly Ridge

Over the last month I've been reviewing the study of Lufengpithecus lufengensis recently published by Xu and Lu (2008). It is the 3rd publication in the ponderous sounding series of monographs entitled "State Key Project of the 9th Five Year Plan -- Origin of Early Humans and Environmental Background." The 2nd monograph in the series deals with a number of sites in the Yuanmou Basin of Yunnan that have produced prolific fossil hominoids. Long thought to be younger than Lufeng, these sites are now known to be somewhat older, between 7-8 mya. Lufeng has been dated perhaps a million years younger. The most important hominoid fossil excavated from the Yuanmou basin is a little heralded juvenile skull which is finally described in detail in the recent monograph (Qi and Dong 2004).

There has been considerable terminological confusion surrounding the hominoid remains from Yuanmou. Some consider them conspecific with the poorly known and somewhat older material from Kaiyuan (Harrison et al., 2002), and they've been subsequently dubbed L. keiyuanensis (the difference in spelling is due to the romanization method employed in China during the 1950s when the site was first discovered). He (1997) in an initial review of the Yuanmou hominoids, attributes the remains to a new hominoid species, L. yuanmouensis. The consensus seems to be building, however, that the proper scientific name, based on nomenclatural precedence, should be L. hudienensis (Qi et al., 2006). This is a very poetic name as it's derived from the fossil bearing locality in the Yuanmou Basin that produced many hominoid fossils called Hudieliangzi, which translated means Butterfly (hudie) Ridge (liangzi). The hominoid bearing localities in the Yuanmou Basin have yielded hundreds of isolated teeth, several upper and lower jaw fragments with teeth intact and a single post-cranial bone (phalanx). The localities and the taxonomy of the hominoid remains are reviewed by Harrison et al. (2002) and Qi et al. (2006). The most important specimen from Butterfly Ridge is, however, the face and palate of a young juvenile hominoid that is the same dental age as the famous Taung Baby from South Africa which launched the careers of both Raymond Dart and Australopithecus africanus. 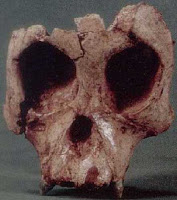 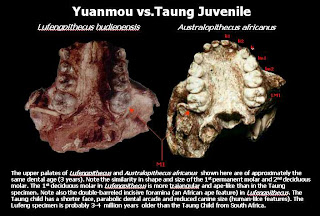 Discovered in 1988 the specimen (YV0999) is beautifully preserved and extremely informative. It was originally briefly described by Zhang Xingyong et al. (1988) and reported on by CK Ho (1990). The juvenile has a dental age of ~3 years and is directly comparable to the A. afarensis juvenile A.L. 333-105 from Hadar, the Dikika child and the Taung child. In brief it has a mix of Asian ape/pongine and African ape/hominine traits with the largest number and most phylogentically significant falling on the hominine side of the ledger. Below is a translation of the description and analysis of the specimen as given in the monograph.


The only cranial specimen of a fossil hominoid from the Yuanmou basin is the juvenile skull YV0999. The specimen preserves a relatively complete face and a portion of the frontal bone. The areas immediately above the orbits match and can be pieced together. Most of the frontal squama is broken away but a portion of the frontal that extends to the coronal suture is preserved on the left side. There are 10 adult upper jaw fragments but they only give a small amount of information regarding the anatomy of the adult hominoid skull. We compare the juvenile skulls of orangutans, chimpanzees, gorillas and australopiths of roughly the same developmental age. A comparison of the characteristics of YV0999 follows:

(7) Orbital shape. Height is slightly greater than width, approximately elliptical in shape, the inner half of the superior margin of the orbit is relatively flat, the lower margin  and lateral margins are relatively sharp.  The shape of the orangutan’s orbits and its relatively sharp inferior and lateral orbital margins is similar to YV0999 but the perimeter of its orbital margins projects resembling the rim of eye glasses. This condition not seen in L. hudienensis or the African apes.  The shape of the orbits in chimpanzees and gorillas does not differ greatly from YV0999 but their lower and lateral margins are relatively blunt.

(12) Nasal alveolar clivus. This area has been damaged beyond recognition. From what remains it trends towards being stepped, thus differing from the orangutan.

(13) The hard palate and dental arcade. The palate is relatively deep, two incisive foramina,  Dental arcade narrow, anterior portion of the arcade is arched,  Both sides extend evenly posterolaterrally. The greater palatine foramen is narrow and deep. It is positioned near the alveolar margin. In both the young and adult orangutan there is only one, very small and narrow slit-like incisive foramen. The tooth rows project laterally and then turn inwards, Gorillas and chimpanzees both have two incisive foramina located close to the alveolar margin similar to YV0999. The greater palatine foramen in orangutans and chimpanzees is located closer to the median plane.

(14) Canine fossa. Maxillary samples from the Yuanmou Basin show a relatively weak canine fossa. Thee canine fossa is very well expressed in orangutans but lacking in chimpanzees. During research it was observed that In gorillas some young specimens have it and others don’t. Its lost in adults.

(16) Face in toto.  Tthe degree of prognathism in the YV0999 snout is very weak. The facial planum beneath the orbits is close to the vertical, only slightly slanted backwards. In the Orangutan the jaw projects to a  significant extent; in side view the eyes are sunken inward. In the African Great Apes and Australopithecus prognathism is weak, the infraorbital plane is vertical similar to YV0999.

In short, the juvenile skull of L. hudienensis in its weak supraorbital ridge, lack of supraorbital concavity, form of the lateral orbital and orbital area, very thin base of the zygomatic arch, pear-shaped nasal aperture shape and facial index is relatively similar to like aged orangutans and differs from like aged chimpanzees and gorillas. The breadth of the interorbital distance and nasal bones and relatively high position of the lacrimal fossa, etc. is relatively similar to chimpanzees and gorillas of similar age.  In addition the short width of its hard palate and the arched anterior of the dental arcade is clearly different from orangutans of similar age. The single infraorbital foramen and the position of the infraorbital foramen is very similar to juvenile Austarlopithecus.

In summary, the pongine like traits of YV0999 relate primarily to the morphology of the orbits and the supraorbital region, and the shape of the nasal aperture. In all other respects, including traits that are usually considered diagnostic of hominines such as 1) interorbital distance, 2) number and placement of facial foramina, 3) shape and configuration of the hard palate and maxilla, 4) size and morphology of the post-canine teeth (to be discussed later), etc. the Yuanmou juvenile sorts with the African Great apes and early and later hominans. So at 8 mya do we have the third chimpanzee, the second orangutan or the "first" hominan?