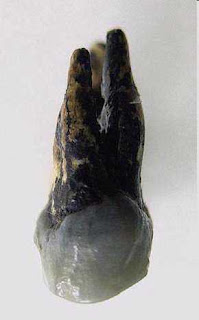 The Paleontological Museum in Assenovgrad, Bulgaria, a branch of the NMNH – Sofia recently announced the discovery of a Late Miocene (Turolian) hominoid in South Bulgaria (Chirpan District). The discovery, the first of its kind in Bulgaria, was the result of intensive paleontological field work that has led to the identification of a number of Late Miocene fossil localities. The recovery of over 30,000 fossils lays a firm foundation for the study of Miocene faunas and paleoenvironments in Bulgaria. Given Bulgaria’s proximity to Late Miocene hominoid discoveries in Greece and Turkey the search for fossil apes was given top priority. The new find consists of a single upper fourth premolar resembling Ouranopithecus. A preliminary report is given by the Bulgarian Science Academy.

Of most significance is the specimen's age, estimated to be ~ 7 mya. This is later than any previously discovered European hominoid and coeval with Lufengpithecus from Yunnan in China. This suggests that Eurasian hominoids survived later and were more widespread than once thought. How this relates to the emergence of hominans is at present unknown.