“The giant rat of Sumatra, a story for which the world is not yet prepared.”

Well Sir Arthur Conan Doyle had it right. Even he may have been daunted by a recent discovery on the neighboring island of Timor. Imagine a fully grown raccoon weighing between 10-15 lbs. Now morph it into a rat of similar weight and size. What you have envisioned is a new species of rat that lived on the Indonesian island until it went extinct about 2000 years ago. As humans have lived on Timor since at least 40,000 ya there's no question that these giant rats graced the palate of many a Timoran. The largest rats alive today are found in the Philippines and weigh a mere 5 lbs at most. Read more about it at Science Daily. 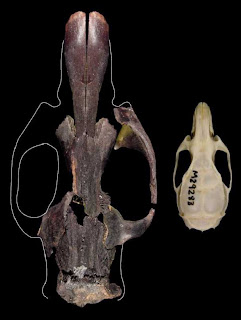